The Hot Bread Kitchen storefront is an unlikely sight on 115th Street in East Harlem. It’s just a few blocks from New York City’s largest housing project and directly underneath the elevated tracks of the Metro North commuter train. Yet there it is, with floor-to-ceiling windows that tempt passersby with a display of baguettes, sourdough batards, sweet Mexican conchas, and mini bialys.

This is no ordinary bakery, in large part thanks to its bakers. On a recent summer day, all of the people mixing and shaping fresh loaves at Hot Bread Kitchen were women. In an industry dominated by men, this demographic shift is intentional.

The vast majority of Hot Bread Kitchen’s bakers are immigrants who brought with them recipes for things like naan, sweet tortillas, and Albanian burek. Hot Bread Kitchen is an organization that aims not only to produce and market unique ethnic breads; it also works to move unemployed immigrant women into well-paid jobs.

Only 56 percent of immigrant women in the U.S. are employed, compared to 79 percent of immigrant men. Jie Zong, a researcher at the Migration Policy Institute, says lack of credentials or credential recognition, limited English skills, and traditional family structures that saddle women with childcare responsibilities can make it difficult for many of these women to find employment. When Rodríguez left her job as a policy analyst to found Hot Bread Kitchen, she set out to knock down those barriers one at a time.

According to the Migration Policy Institute, nearly 200,000 unemployed immigrants in New York City are looking for work at any given point. And there aren’t enough job training programs to meet demand. “There is not much incentive for local governments or agencies to invest in these programs for immigrant women, and there isn’t a lot of federal funding available for these types of programs,” Zong says.

Hot Bread Kitchen hopes to bridge a small piece of this gap by offering a nine-month program to 15 women at a time. The women learn how to bake and also cultivate other skills like kitchen math and science, basic English, and how to build a resumé and interview for a job.

But it’s not just participants who are evolving. Over the past two years, head baker Aileen Semenetz says she has become a lot more patient. “I think it can be difficult for new people to come in and have no idea what’s going on,” she says. It’s better for newcomers if they can “just have people surrounding them who understand.”

The nonprofit bakery sells bread in the East Harlem storefront, at farmers’ markets, and to dozens of restaurants in New York City and beyond, generating around 70 percent of its operating budget. Those funds enable the organization to pay participants for all their time, even when they’re in the classroom and not the kitchen. That’s crucial, says Rodríguez, because low-income women generally “need to be earning money if they’re going to be away from their families.” 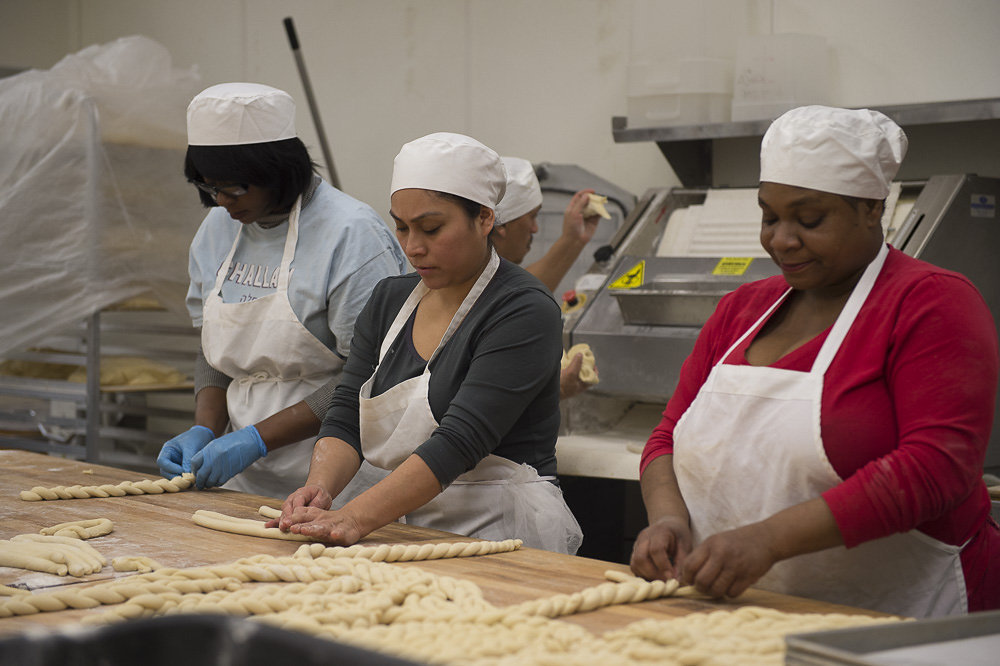 It hasn’t all been smooth sailing. As Hot Bread Kitchen’s production started to increase, so did food costs. Rodríguez had to decide whether or not to continue using 100 percent organic flour. “We weren’t seeing a return in the market; our customers weren’t really willing to pay a premium,” she recalls. So, “although it was congruent with my personal commitments, it wasn’t the mission of the organization. We still do use a lot of local grain, but we don’t use 100 percent organic flour.”

Hot Bread Kitchen also arranges its participants’ schedules around their busy lives when possible. Take Fanny Pérez, for example. She started at Hot Bread Kitchen as a trainee three years ago and has since been hired as a full-time staff member. Pérez works from 8:00 am to 4:00 pm every day, which allows her to drop her daughter off at school on the way to work and pick her up on the way home.

When trainees finish Hot Bread Kitchen’s program, the organization also helps find them a job. Graduates have gone on to work as bakers at Whole Foods, the fast casual chain Sweetgreen, and a number of upscale bakeries and restaurants. Since its founding in 2007, Hot Bread Kitchen has trained 83 women, 33 of whom have graduated and gone on to work in bakeries or restaurants.

“One of the benefits of this program and others like it is that they are working very much within a local labor market and sort of thinking about things on the ground,” says Audrey Singer, who has researched immigrants’ employment as an immigration policy analyst at the Brookings Institution, a nonprofit think tank in D.C.

Rodríguez says Hot Bread Kitchen’s success stems not only from relationships with local bakeries, but also from its choice of participants. “It sounds obvious,” she says, “but too often job training is about finding people work without recognizing that those will be more successful placements if it’s work that they’re interested in doing.” To that end, she tries to hire people for whom cooking and baking are pre-existing passions, noting, “We try to test for efficiency of movement, sense of urgency, attention to detail, and the love of food.”

Pérez, for example, used to spend her free time making Tanta Wawa, a South American sweet bread shaped into people and animals, and traditional Ecuadorean rolls filled with cheese. Now, she works as a supervisor at Hot Bread Kitchen and runs her own catering business on the weekends.